The Well Society, the democratic fans’ group set up by Motherwell FC to take on the long- term ownership of the club has become the latest group to become a member of Supporters Direct, the umbrella organisation for supporter groups in Scotland. 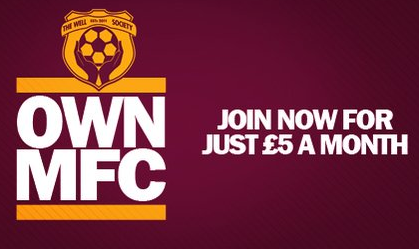 The Society is on a mission to achieve a controlling shareholding in the club by 2020. It is well on the way, having amassed nearly 1700 adult and junior members who contribute financially on a regular basis.

Supporters Direct Scotland is undertaking a number of activities to help groups such as the Well Society with their ambitions and the transition for supporter groups and clubs to become democratic co-operatives where each member gets one vote, regardless of the size of their shareholding or contribution.

Brian McCafferty, the Well Society Chairman, said “The Well Society is pleased to become a member of the SDS and be part of a growing network of supporters’ groups who, like us, believe in the merits and advantages of fans owning their own club and who can pass on the ownership to their children and grandchildren.”

Andrew Jenkin, head of Supporters Direct Scotland said “We’re delighted to welcome the Well Society as a member of SDS. The group are extremely well organised and have a clear plan of how they will achieve supporter ownership by 2020.”

“We look forward to helping the Well Society with fundraising opportunities, sharing experiences of ours and those of our members and by opening up a network of advocates for what they’re trying to do.”

“The benefits of further supporter involvement in ownership are well documented and we commend the work of Well Society and others groups that are undertaking the journey.”

The announcement has been made during The Well Society’s ‘Fan Ownership Week’ which concludes with the clubs’ encounter with Hearts, who through the Foundation of Hearts, are undertaking a similar journey towards supporter ownership. Supporters Direct Scotland have been invited to attend as a guest of the Society.