The annual Supporters Direct Scotland ‘fans’ conference’ is to discuss topics including Scottish football’s alcohol ban, safe standing areas in grounds and increasing calls for supporter representation at board level. 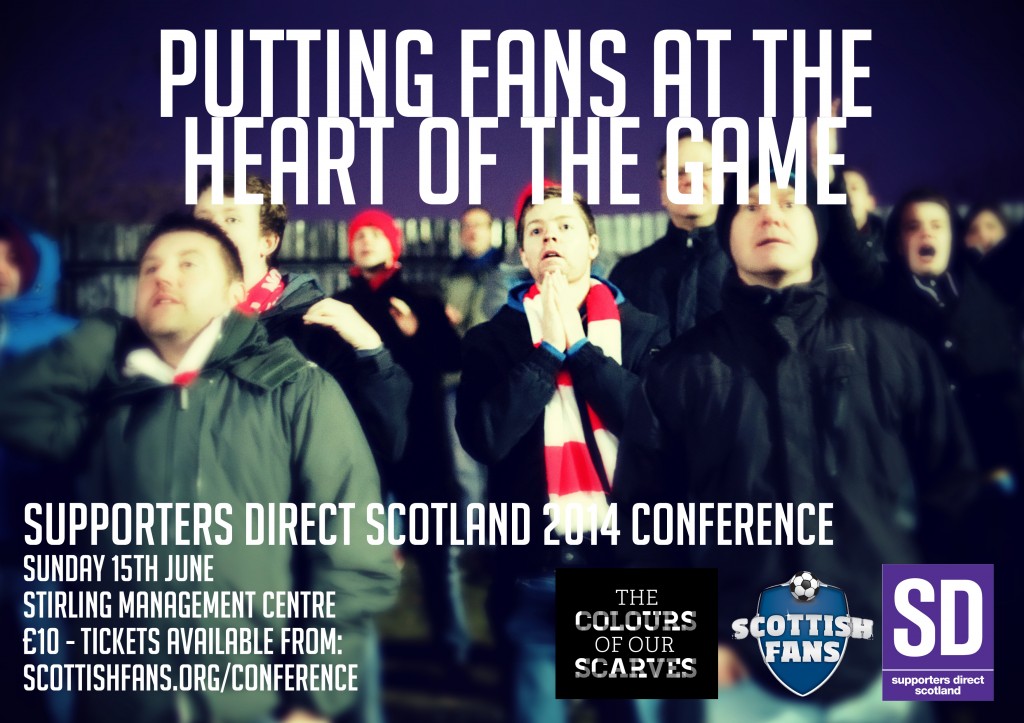 *GET YOUR TICKETS FOR THE DAY HERE*

The full results of the Supporters Direct Scotland National Football Survey, in association with the Scottish FA, will be also be revealed at the event in Stirling on the 15th of June.

The conference will include speakers including Jon Darch, from the Safe Standing Roadshow – a prominent campaigner for safe standing at grounds – and Dr Borja García, a member of the European Commission’s expert group on sport policy. Additional speakers will come from the ‘No to Hull Tigers’ group, sports finance expert Stephen Morrow from the University of Stirling and former Kilmarnock and Morton manager Kenny Shiels.

Paul Goodwin, Head of Supporters Direct in Scotland said: “Having a clear understanding of the views of Scottish football’s customers, or fans as they are also known, is essential for helping shape the game’s future.

“The last few years have been unprecedented for our game but there is a clear change at all levels of the game with an openness and willingness to talk and, most importantly, listen to supporters’ views.

“The findings will be discussed and debated at the Supporters Direct Scotland Annual Conference on the 15th of June at the University of Stirling by fans, people working in the game and academics. We would urge anyone with an interest in helping shape the game’s future to come along and help contribute to this important debate.”

The Fans’ Survey seeks to bring a greater understanding of supporters’ perceptions of football’s role within Scottish society, the match day experience, governance of the game as well as grassroots and youth development, among other topics.

The Supporters Direct Scotland National Football Survey, in association with the Scottish FA, is the second national football survey carried out, the first being conducted twelve months ago by the Scottish FA.