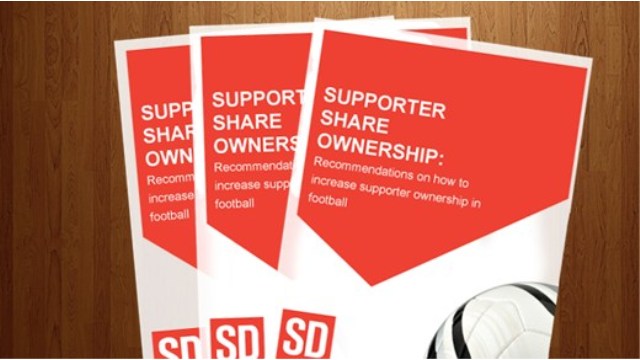 The case for encouraging greater levels of collective supporter share ownership, primarily via the supporters’ trust model in football, has been strengthened still further in recent years.

There are an increasing number of good examples of supporter ownership, both in England and throughout Europe. Memorably, the 2012/13 Champions League was contested by FC Bayern and Borussia Dortmund, two clubs owned by their members.

In England, Portsmouth Supporters’ Trust took majority control of their club via a local consortium in 2013, demonstrating both the potential of the supporters’ trust model, but also many of the barriers to greater levels of collective supporter shareholdings.

Political support for this agenda has also grown, not least through manifesto pledges from all three major parties at the 2010 election. The on-going Culture, Media and Sport Select Committee Football Governance inquiry recognised the value of supporter ownership, and the need to encourage its further development. It recommended “measures that increase their [supporters’ trusts’] ability to raise money; and measures that increase the opportunity for supporters’ trusts to achieve a share in their club, whether on a minority or majority basis.” This highlights barriers to increasing the levels of collective supporter share ownership in football and makes recommendations about how new opportunities to facilitate supporter ownership can be taken.

The paper’s central proposal is for the creation of a Community Football Fund which would be established as a social investment intermediary capable of securing various forms of social investment to assist supporter ownership. Also proposed are measures such as tailored tax relief for supporter-led takeovers and pre-emption opportunities for supporter share purchases. Supporters Direct and the trust movement have been at the forefront of these developments, and this paper sets out our position on how to take the next step towards widespread supporter ownership of clubs.