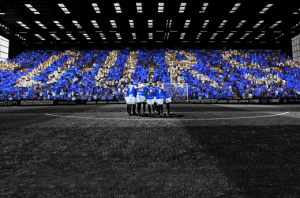 It’s “Ours”: Week of events will celebrate the work of supporter owned clubs

Supporters Direct Scotland (SDS) has today announced that Supporter Ownership Week, is to take place from the 11th to the 18th of April 2015.

SDS and SD in England and Wales have worked alongside supporters for the last 15 years to make the dream of supporter ownership possible, and the week is about celebrating the people who’ve done it, and the people who have taken or are taking the journey. In Scotland that includes work with supporters of Hearts, Motherwell, Rangers and Hibs, to ensure that more supporters can democratically control their clubs.

The week begins on the 11th April, when a host of supporter owned clubs play their regular fixtures at home. There will be a series of events across the country and online across the week, with more set to be announced. There will also be a crowdfunding campaign to be launched on the 27th March, in an attempt to raise money for SDS to provide more support for supporter ownership in the future.

Two parts of the week have already been announced:

Among the clubs in membership of SD Scotland and SD in England and Wales are three SPFL clubs, four English Football League clubs, and three in the English Football Conference Premier, three in professional Rugby League, and even one in American Football! A full list can be found at http://www.supporters-direct.org/supporter-ownership-week/what-is-supporter-ownership where you can also read more about what supporter ownership actually is, how it works, and how you can get involved in the campaign.

Supporter ownership plays an important role in SD’s core work to ensure that supporters have a voice at their clubs, alongside that of establishing supporters’ trusts and campaigning for changes in the rules to benefit the supporters and communities that sustain all clubs.