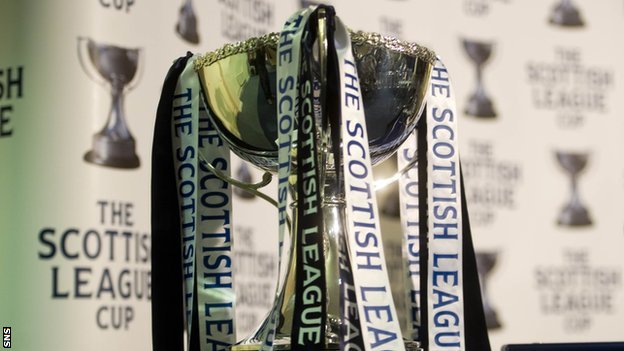 This Sunday sees the first major domestic honour of the season decided, as Aberdeen and Inverness Caledonian Thistle face off in the Scottish Communities League Cup Final at Celtic Park. In building up to the hotly anticipated match, Scottish Fans has picked seven previous Finals to remember from the competition’s sixty-seven year history.

Rangers 4-0 Aberdeen – 5th April 1947 – Hampden Park
The first ever League Cup Final was played out in front of just over 82,000 fans at Hampden Park. Rangers, who would go on to win the League championship the same season, comfortably saw off their opponents from the north, with goals from Billy Williamson, Torrance Gillick and two from Jimmy Duncanson. Aberdeen would make up for defeat only fourteen days later however, returning to Hampden Park to win the Scottish Cup with a 2-1 victory over Hibernian.

Celtic 7-1 Rangers – 19th October 1957 – Hampden Park
Perhaps the most famous of the fourteen Old Firm finals and the first time that the two Glasgow clubs had met at this stage of the competition. Celtic were looking relatively comfortable at half-time, boasting a 2-0 lead before adding a third eight minutes into the second half through Billy McPhail – on his way to completing a twenty-seven minute hat-trick – before Rangers struck back to make it 3-1. Any hope of a comeback however was shortly lived as Celtic added the final four goals in just twenty-three minutes to register one of the club’s most famous wins. The dominant victory also spawned the Celtic song ‘Hampden in the Sun’ – adapting Harry Belafonte’s original Island in the Sun from the same year.

Rangers 1-2 Celtic – 25th October 1965 – Hampden Park
The 20th anniversary of the League Cup Final saw the third Old Firm final, with Celtic avenging the previous year’s defeat with a 2-1 victory of their own. The side featured seven of the players who would go on to immortalise themselves in Lisbon two years later as part Britain’s first ever European Cup winning club. This was also the highest attended League Cup Final in its history, with 107,609 fans packing Hampden Park to see a John Hughes double win the cup for the Hoops. The Old Firm would monopolise Scotland’s domestic honours in the 1965/66 season, with Celtic clinching the championship, two points ahead of their neighbours, whilst Rangers won an Old Firm Scottish Cup Final 1-0 in a replay.

Hibernian 3-6 Celtic – 26th October 1974 – Hampden Park
The highest scoring League Cup Final in history featured two sides who both fielded all-Scottish teams. It also saw two players register hat-tricks, with Joe Harper of Hibernian and John ‘Dixie’ Deans of Celtic respectively, dominating the score sheet. Celtic would complete a double later in the season with a 3-1 victory over Airdrieonians in the Scottish Cup Final, although Hibernian could console themselves by finishing second in the First Division, a place above their cup opponents.

Dundee United 3-0 Dundee – 6th December 1980 – Dens Park
The 1980/81 Final is one of only two to not have been played in Glasgow. The two Dundee clubs met at Dens Park in December of 1980 with United winning their second successive cup. It is also unique in being the only final to ever feature a club playing at their home stadium, although the perceived advantage did not have the desired effect for The Dees. Neither side has won the trophy since, despite the five subsequent finals between them. Dundee would end the season on a high note however, sealing their promotion to the Scottish Premier Division to join their nearby neighbours.

Raith Rovers 2-2 Celtic (6-5 pen) – 27th November 1994 – Ibrox Stadium
1994 saw one of the competitions biggest upsets, with the Kirkcaldy side edging out the Glasgow giants on penalties at Ibrox. Raith – who would go on to win Division One – looked dead and buried when Charlie Nicholas scored six minutes from time to hand the favourites a 2-1 lead. Only two minutes later however, Gordon Dalziel equalised to force extra-time and penalties. Celtic legend, Paul McStay missed the decisive spot-kick to hand the cup to Raith Rovers and extend Celtic’s wait for a first trophy since 1989.

Hibernian 0-2 Livingston – 14th March 2004 – Hampden Park
Livingston’s only major domestic honour arrived under a shadow as the Lothian side entered administration mere weeks before the final. The main body of the squad was kept intact for the match and David Hay’s men saw off their Edinburgh opponents 2-0; Derek Lilley and Jamie McAllister scoring within two minutes of one another to clinch a historic victory. It meant that Livingston became the first club out with the Old Firm to win a major honour since Heart of Midlothian in 1998.